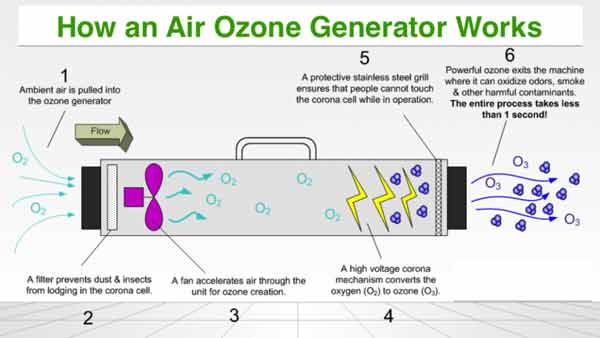 Are you a homeowner and your house is facing the problem of water damage, mold, smoke damage, or the dreaded “death smell” of an expired rodent in a crawl space?

If facing such problems, then an ozone generator could be an ideal option for you.

What are ozone generators?

Ozone generators are a gadget that can emit highly mercurial ozone particles by passing a voltage through an oxygen-containing chamber.

The ozone gas produced by these machines has many applications, both commercial and private.

How does an ozone generator work?

Input filters are also standard features to capture dust and particles. Ozone generators are generally very reliable and can be referred to as air purifiers or ozone cleaners.

Ozone generators designed for home use are compact, portable and lightweight. When used as intended, ozone machines are safe, efficient and have a long service life.

What are some types of ozone generator?

Corona is the cheapest and most popular type because it can run on normal air and does not require an external source of oxygen.

These generators are still the most common in personal and industrial environments.

On the other hand, UV light ozone generators use UV rays to produce ozone but can only reach a low concentration.

Typically, UV generators are more affordable, but useful only in cases where a smaller, steady ozone source is needed.

Because they need pure oxygen to function, the cold plasma type is very expensive and far less common.

What are some of the known applications of ozone generators?

Ozone generators have a variety of applications in a variety of environments. The ozone gas produced by these machines combines with particles in the air and water, rendering them inactive.

Thus, functions include removal of odor and taste, mold and mildew eradication, contamination control, disinfection and inactivation of harmful bacteria, and water purification.

Ozone generators are often used during cleanup after environmental disasters, as they effectively reduce smells and control mold production after flooding. They are also used on farms mainly for odor control and as a disinfectant.

In food production, ozone generators are used to extend shelf life or to remove the taste and color of certain foods. In the medical field, ozone is a powerful disinfectant and has therapeutic applications, such as the treatment of cancer or slow-healing wounds.

In the home environment, ozone cleaners are generally used for cigarette smoking or odor control of pets, removal of mold in small, humid areas and for water or air purification.

You may like to check: Best Ozone Generator for Cars 2019

How can you select right ozone generator?

There are some important things you need to know before you can buy an ozone generator. However, before going into detail, it is important to note that we are talking about ozone generators with corona discharge.

which typically produce less than half a pound per day or less than 10 grams per hour of ozone.

This is the most important factor in choosing an ozone generator. The required amount of ozone depends on the application requirements.

As mentioned above, the ozone concentration can affect both the effectiveness of ozone in a given application and the amount of ozone that can be generated by a given ozone generator.

Normally, you have to read the fine print to see what concentration they give a specific production rate.

Ozone generators can be operated on different oxygen sources such as dry air, concentrated oxygen or purchased oxygen as the feed gas. First, a short discussion of the feed gases.

Originally, ozone generators mainly worked with air as the feed gas. Air contains about 20% oxygen and only the oxygen can be converted to ozone. Using air as the feed gas, the maximum economic ozone concentration that can be obtained is about 3 weight percent.

In addition, the air must be extremely dry, as moisture reduces the ozone output and damages the ozone generator. To produce a reasonable concentration of ozone, the air must have a dryness, as measured by the dew point of about -100 degrees Fahrenheit.

This means that in a million parts of air is only a part of water. This dryness requires special dryers to remove the moisture. Cooled dryers found on some compressors can only reach a dew point of -40 degrees Fahrenheit.

All ozone generators generate heat as a result of the ozone production process. The generator must be kept cool as the ozone recycles into oxygen as the gas temperature rises, making the process inefficient.

Producers of ozone generators deliver their ozone output and concentration data based on a specific operating temperature, usually 68-72 degrees Fahrenheit.

Any degree above the specified temperature will reduce production. For example, at any rate of temperature increase, the rate of ozone production in some systems drops by 0.6%.

If the machine were operated at 72 degrees and actually operated at 82 degrees, production would be reduced by 6%. Some generators will shut off completely at certain temperatures to avoid damage. So cooling is a critical issue for the generator

There are two common cooling methods, air cooling with fans and water cooling. Air cooling is less efficient and reduces the size of the ozone generator that can be built.

In general, ozone production in excess of 10 pounds per day with air-cooled ozone systems cannot readily be accomplished.

Ozone production is a safe and effective way to use this natural resource and use it in almost any environment. With all over pollution problems, it is no wonder that ozone generators are the must-have device at your home.